A year ago I was lucky enough to get "Hold the Line" a boardgame of the American Revolutionary War.
I enjoyed this game so much that I tried to get the "French & Indian War" expansion. Although readily available over in the US the P&P was ridiculous and the game was unavailable in the UK.
Two weeks ago a copy turned up on ebay. 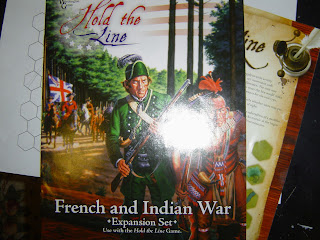 The expansion contains only five battles but many more are freely available online (I have found an extra seven scenarios so far). Over last weekend myself and eldest sprog Glynn played two games of "Fort Duquesne" sometimes more commonly known as "Braddocks Defeat". 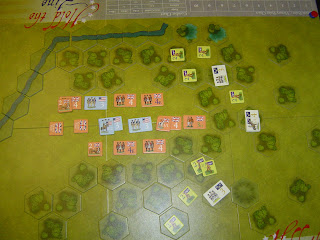 Braddock led his men into an ambush by French and Indian forces. Braddock himself was killed and his troops routed.
In both our refights (we swapped sides for the second play), Braddock managed to fall back and rally his troops. Under my control he established a good defensive position which was too strong for the French to attack. Glynn was very aggressive and sent Braddock forward with the Grenadiers in bayonet charges to drive back the ambush. Two very different tactics that both brought victory against the historic result.
I was a bit worried about these results so I decided to replay the game solo. This time I played the French forces with a lot more "Bravado". Braddock was killed early and without his ability to "Rally" the British column was driven back and destroyed. The photo shows the endgame. 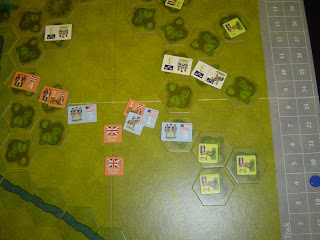 This third refight was much more historical in its result. If the French can kill or even neutralise Braddock early in the game it becomes much harder for the British player to command his troops.
Very much looking forward to more battles of this game.
Posted by Reg at 08:14 No comments:

Last up from the painting table, 20mm plastic Persian army. 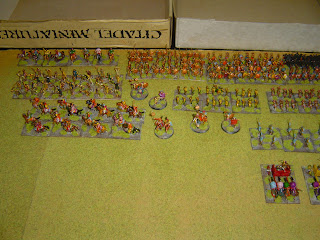 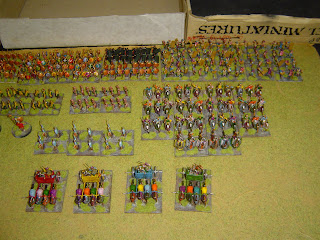 After the C&C Epic games at Declans, I have been looking forward to more ancients.
"Lost Battles" is waiting for Xmas morning and will be something to bring to the next game night.
I believe Arthur also has a Persian army which should let us put on a massive "Gaugamela" refight.
Posted by Reg at 07:18 No comments:

Email ThisBlogThis!Share to TwitterShare to FacebookShare to Pinterest
Labels: Ancients

I have also finished a squad of Grey Knight Terminators for Space Hulk.
These are plastic figures which are a bit easier to paint than metals. They will be great for the games but do not have the same heft as metals although much more resilient. 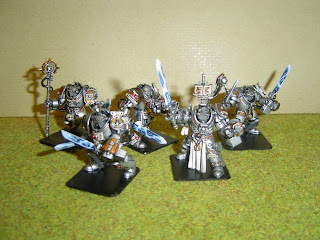 This should prompt me to get a game of Space Hulk over the holiday period.
Posted by Reg at 07:02 No comments:

I have been busy painting and as usual getting bogged down with multiple projects
instead of finishing one before starting another.
On the plus side, I have just finished three of these projects and have time to post some results.

First up and just for fun, 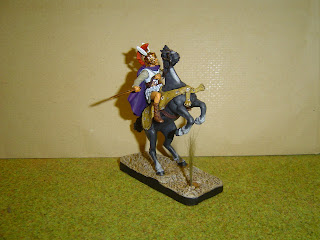 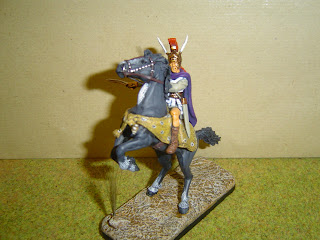 "Alexander & Bucephalus"
54mm figure from "El Viejo Dragon" This has been lying around in a drawer for years. I enjoyed building and painting this so might try more in the future.﻿
Posted by Reg at 06:51 No comments:

Friday 2nd December saw the first meeting of a new gaming club.
"Loaded Dice" is based in the Dooneen Center just outside the village of Tempo.
For the first meeting we had eight members. Not bad for first night but we need to expand.

I played a game of "Hold the Line" American War of Independence. We played the "Long Island" scenario when the American forces have to fall back from strong defensive positions before being outflanked.
Dave was commanding the evil British army. Its was Daves first game of HtL and first time looking at this scenario but he still quickly grasped the situation and threw his Light Infantry and Grenadiers at the rebels. 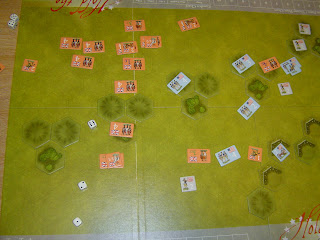 Due to an aggressive attack throughout the game, The British kept the pressure on and denied the Rebels any chance to disengage. Victory to Dave! A very close game with only a single point/unit difference at the end.

Meanwhile, at another table, Marshal Neigh (Steve) has betrayed his French masters to join the forces of Wellington in another refight of "Waterloo". Glynn was commanding for Bonepart. 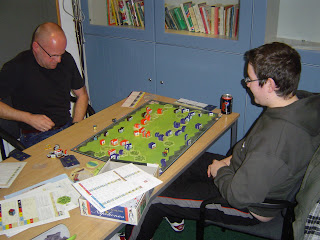 This game also came down to a single victory banner. Hougemont, La Haye Saint and Papelotte all changed hands several times during the battle. In the end Steve claimed the victory. (Such a rare event ha!)

On yet another table, the world was reduced to molten slag. 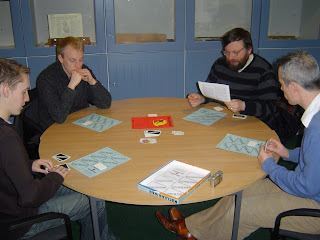 And then "Ca$h n Guns" was played 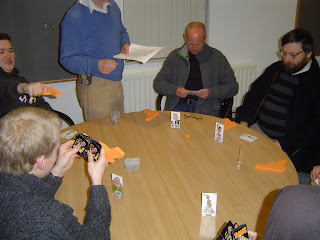 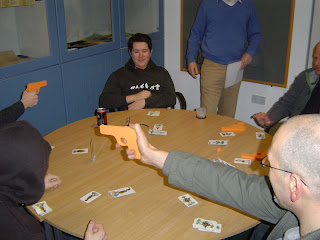 The evening descended into murder, backstabbing (or shooting) and general skullduggery.
Mike earned the nickname "Chiken liver" by collecting all the "Shame" markers.
Glynn showed his aptitude for patricide and Ross collected bulletwounds.
Pete  "roleplayed" with his hoodie up.
This game is great fun played in the right spirit. We had multiple games to end the evening. All of them a real blast.

So the first night of Loaded Dice was a terrific start. Jan Friday 13th is the next meeting. We need to increase numbers and all types of games are welcome.
You can check our yahoo group here  http://uk.groups.yahoo.com/group/loadeddice/
Posted by Reg at 14:49 No comments:

Napoleons Triumph is a boardgame based on the battle of Austerlitz.
The French army led by Napoleon defeated a larger allied force of Austrians
and Russians.
I have spent two game sessions teaching and learning this game.
Two opponents are now ready for battle. Declan and Steve. Now its just a matter of getting the
time to play. 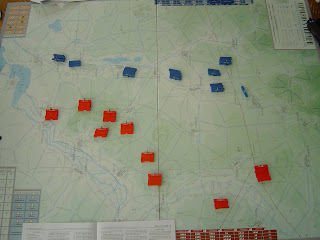 A pic of the board setup almost ready to go!
The French get to detach a few units at the game start.
Posted by Reg at 13:02 No comments: