I have been busy with kids on summer break from school so any opportunity for a game has been snatched up. When the weather finally started to behave like summer there was only one thing to do! 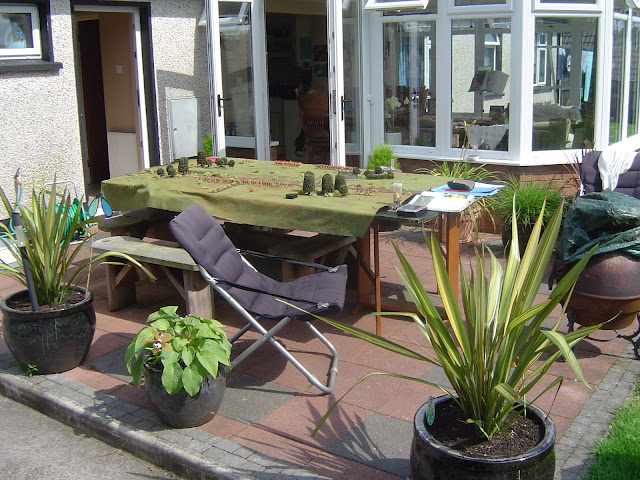 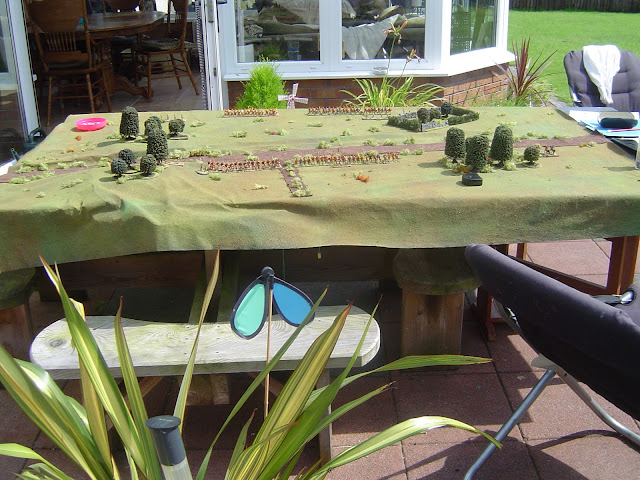 The "Hail Caesar" rulebook had eventually arrived in the post so we played a scenario from the book. "With your shield, or on it" a small hoplite battle from the Peloponnesian War. Athenians and Thebans try to block the passage of a Spartan and Corinthian force.
By the usual scale of "Hail Caesar" this is a small game with only a few units. Great for learning the system and we managed to fit three plays into the afternoon. These photos are from the first of those clashes.
I commanded the Spartan led forces against the Athenian/Theban allies commanded by Glynn. 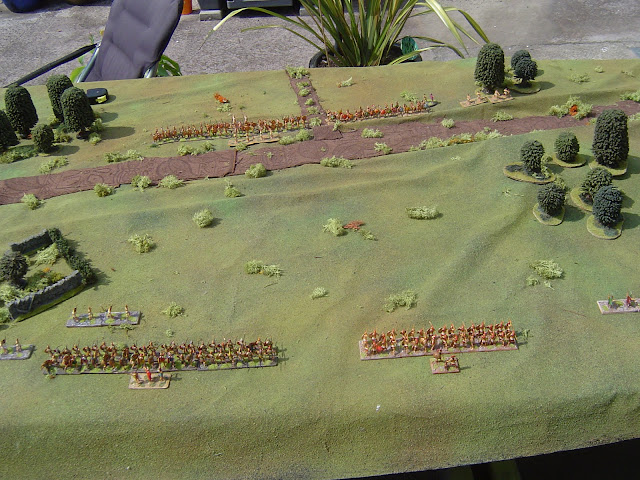 Foreground shows Spartans and Corinthians (Spartans on right). The allies in position along the road.
There is another allied unit "hidden" in the sunken road through the forest, undeployed at start. 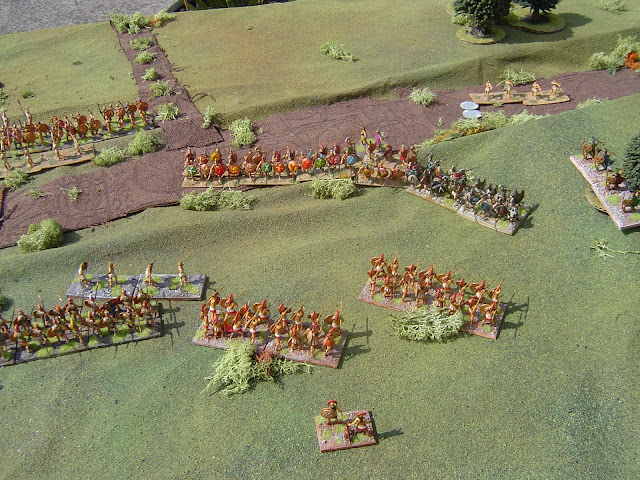 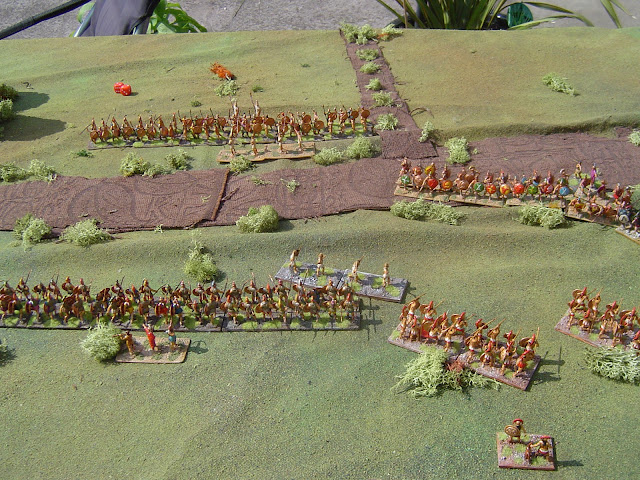 Confident (perhaps arrogant) in their ability to defeat any enemy, the Spartans advance. The hidden Athenian unit breaks cover to join their allies left flank.

The scenario did feature a few skirmishing units but as the phalanxes marched straight towards each other, these lighter units quickly decided to get out of harms way, unvalorous but probably wise! 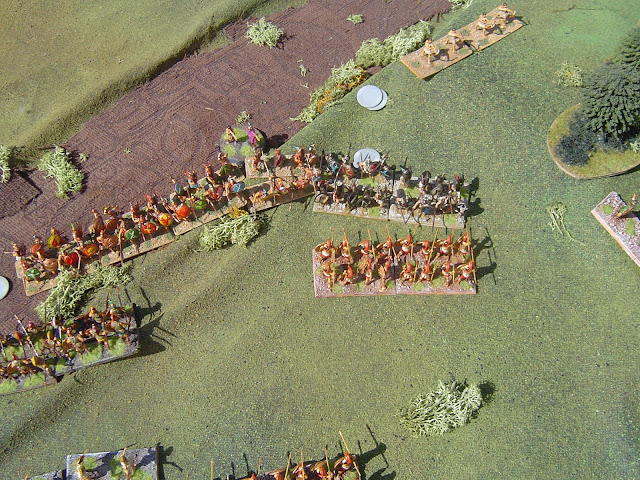 Unsuprisingly the Spartans and Athenians are first to test their mettle in the othismos.

Over the next few minutes the rest of the phalanxes engaged, lots of pushing and shoving with no real advantage to either side. Eventually the quality of the Spartan units showed and a gap appeared in the allied line. 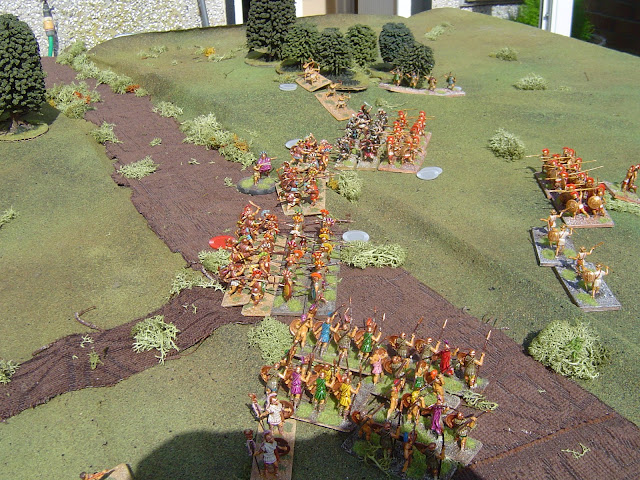 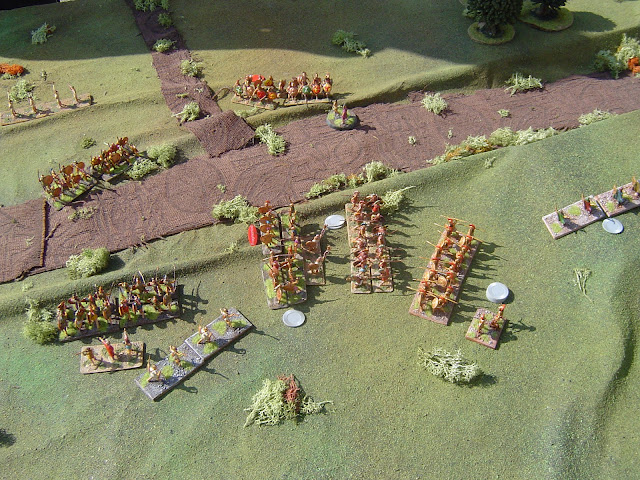 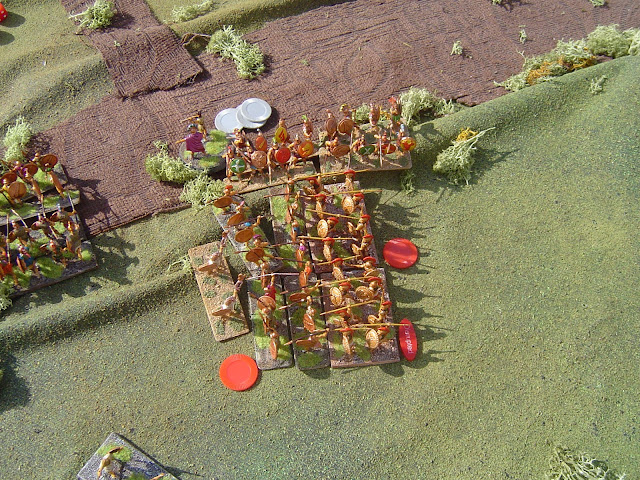 The Athenians mostly fled leaving the brave Thebans to be surrounded and cut to pieces although they took a heavy toll on the Corinthians. A mighty victory for the Lacedaemonians.

In both refights the Spartans also won but the results always hung in the balance until one or two allied units broke and their line collapsed.
The rules gave a fun and fast game although the table was a bit too big for a small battle with 20mm figures. I had scaled all the rules distances to two thirds of those given.
I had just finished the Spartan Hoplites by Zvelda and this was their battle debut. Very nice figs and I think a Spartan army could be in the works.
More "Hail Caesar" battles will be played and will probably be bigger than this one.