Mission 3 or "Rescue" has always been one of my favourite.
Its a very difficult scenario for the Terminators. Squad "Lorenzo" are deep in the hulk after recovering a damaged recon droid (The C.A.T.). Squad "Gideon" must fight their way towards them, effect a union and escort the C.A.T. back to safety. Between the two squads lies a chokepoint, a large junction and perfect place for the enemy to lay an ambush.

In the last reprint of the game, 3rd Edition, the game designers had "neutered" the enemy forces to a measley 2 reinforcement blips per turn. I will play with the original scenario strength of 3 blips per turn.
(Several rules have been changed or added to the 3rd Edition that make life easier for the marines. I play with my homebrewed 4th Edition, which limits some of the marine advantages)

Again the Terminators squads should advance swiftly, control of the center junction is vital.
For the chaos forces, 3 blips per turn sounds like a lot, however they must cover several areas.
Grabbing the center junction is the best way to slow the marine advance but it is necessary to harass the escaping marines  on flank and rear. Near the marines exit point is another "spawning" area. It can give the genestealer (or in this case Demon) player, another chance to cut the escape route. 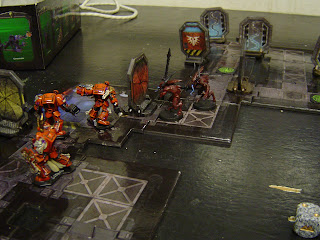 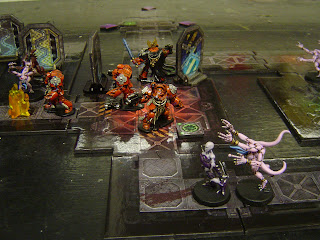 Squad Lorenzo reach the main room, at the start of the junction.
Two marines try to establish a rearguard while the flamer and
"Bob" who  carries the C.A.T. lead the way. 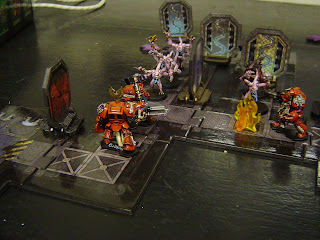 Meanwhile, Sgt Gideon and the Assault cannon marine are pushing forward from the other side.
Leon with the assault cannon, (he has not earned nor deserved the prefix of Bob) quickly burns his way through his action points, the command points and most of his ammo without any noticable effect. It is amost a relief when a Pink Horror drags him to eternal agonies in the warp.
Sgt Gideon steps up and smashes his way through two Bloodletters and reaches the junction.
Just as the possibility of success appears to the terminators, the chaos gods laugh and roll the dice!
Squad Lorenzo on reargaurd is overwhelmed. A bloodletter cuts down the defenders and catches  the marine with the C.A.T.
At the marines entry/exit point the demons start to pressure the defenses. A marine falls, leaving only a single terminator to hold the area.
Defeat is hanging over the Blood Angels (again).

In the Turn "Endphase" the marines catch a lucky break. The C.A.T. is now moving randomly but it scoots straight to Sgt Gideon, he quickly attaches it to his "Magnabelt TM". 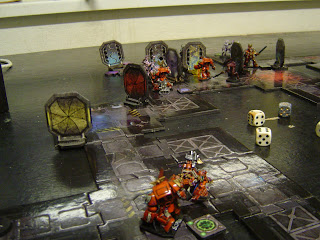 Gideon has a long, long way to come back. 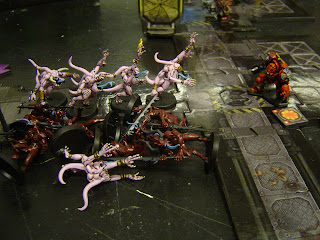 As Sgt Gideon sprints towards the exit, the Chaos forces throw everything they can into the attack. Bob "Scipio" empties magazine after magazine into the hordes. (In one turn of Overwatch fire he kills six bloodlettersand a pink horror!)
Eventually the sheer force of numbers overrun Scipio, but even then he draws a round of hand to hand combat before falling. This single round of combat delays the demons by exactly enough to stop them catching and attacking Gideon. 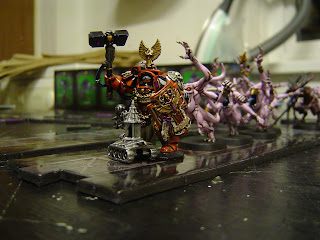 With demons breathing down his neck, Sgt Bob Gideon throws himself through the rapidly closing bulkhead door. Victory and Glory for the Blood Angels!!!

This game ended up on a single action point! If Scipio had lost his hand to hand combat the demons could have reached Gideon with enough for one attack. From behind, with no bonuses, Gideon, doubtless, would have fallen.
Even though I was playing to test out the demon rules, I was delighted with the result. This victory cost the marines 90% casulties and was only possible due to several heroic sacrifices and a lot of luck.
Just one of the resons why I think Space Hulk is one of the greatest games ever!

Still, I have several other projects on the go, so time for something completely different, although I will most definately be back!
Posted by Reg at 13:37 No comments:

For this second test I picked the "Cleanse" mission. Not one of my favourites but at twice the size of mission #1 and with ten marines, it should work ok.
The terminators have two target rooms to destroy and the baddies get two blips per turn. Its important for the marines to push forward before the chaos forces can gather numbers. 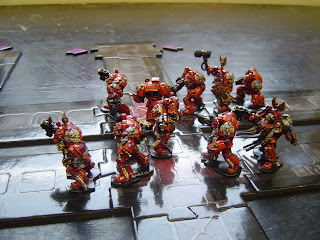 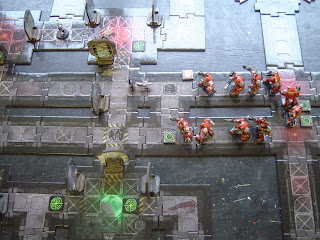 As the Blood Angels advance the chaos forces keep pace on the flanks.
A few Demonettes are spotted at the rear of the formation but are despatched before
they can "dance" and use the Hypnotic Glamour ability.

As the terminators approach the first junction they decide to "overwatch" the right flank. With interlocking fields of fire backed by an assault cannon. The main attack will push through on the left.
As per standard operating procedure, the flamer armed marine will lead the way. 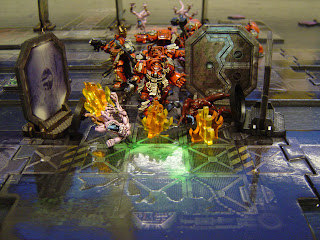 The main force push through and past the room on the left. Sgt Bob Gideon takes up a blocking position to stop the demons reinforcing this flank. The flamer marine and support are closing in on the first objective room.
All this time, the demons have been growing in number. Most rush forward on the right flank to get ahead of the termies but back at the first junction a few Pink Horrors surge to the attack.
One of the monsters dodges through a hail of bullets and reaches the assault cannon marine. The crossfire finally kills the beast but as it is blown apart, "Blue Horrors" (Demon ability) spill from the ruined corpse and grab the heavy weapon specialist. Kicking and screaming, "Bob Leon" is dragged into the warp. 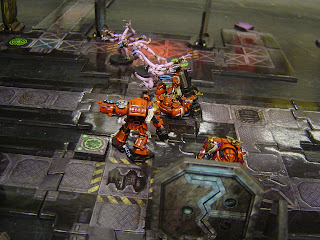 Almost instantly, the terminators defensive perimeter collapses. Back at the entrance area, the rearguard are overwhelmed by the seductive demonettes. Without the benefits of a crossfire, the first junction is rapidly lost to the chaos forces.
The lead marines are not far from the target, if Sgt Bob Gideon can only hold his position for a few moments! With his Thunderhammer and Forceshield he prepares to fight.
The first opponent is a Pink Horror. The Sgt smashes it into pieces but again the warp rips open and a mass of blue horrors swarm over the marine. Still swinging the hammer, Bob is dragged into an eternity of living hell. (Nice :-) 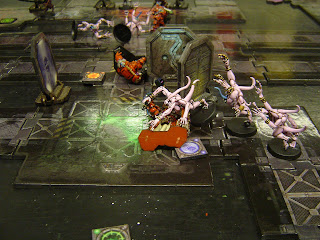 Now only the foremost three marines survive, Bob the Flamer, Bob and Sgt Bob Lorenzo. With demons on all sides the situation is dire. But marines never give in! So with a lucky draw of six command points, they immoliate the left target room and, back to back, await the finale. 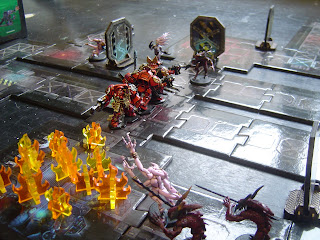 "For the Emperor !"
("Who is actually a jolly good chap,
once you get past the whole
"Thousand souls a day" thing!") 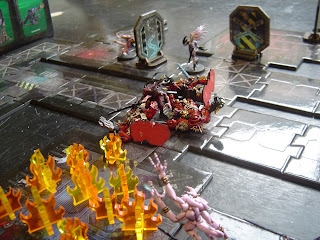 Even though the Blood Angels lost this game they had come very close to that second target and the game was exciting right up to the end. This game was the Pink Horrors chance to shine. The "Blue Horrors" ability made two vital kills at exactly the right times.
I think that my demon rules are pretty spot on but just in case, the Blood Angels are going to attempt another mission.

PS. Many years ago I met a Warhammer 40K player with a huge army of Ultramarines, he had given each and every one of them a name. Not to be outdone, I immediately named all of my marines.
Bob.  All of them! In the background "Fluff" of the 40K universe, Space marines are all clones, so this works for me ;-)

PPS.  Sgt Bob Gideon and Bob the Assault Cannon marine have never lived up to expectations. Gideon usually gets killed in his first or second fight (even on "Guard"), and Leon's cannon seems to malfunction (usually exploding and killing half his buddies) more often than not.
Its only a run of bad luck but starting to be an ongoing joke around these parts.
Oh well !  On with the next mission.
Posted by Reg at 04:48 No comments:

I have been very busy painting minis for a Carthaginian army and needed a break for some gaming.
Time to break out the "Old faithful" Space Hulk.

For some time I've been considering my Chaos or Demonic variation to battle against the Grey Knight Terminators that I've collected. I had played a few games with some homebrew rules and although they where fun, the demons lacked enough "Bite". They seemed to be little more effective than genestealers and not worth calling in the specialist demon killers, the Grey Knights, when regular termies could do the job.
So with draft #2 demon rules and Termies from the noble Blood Angels chapter, I set up the board for mission 1 from the 3rd edition mission book. 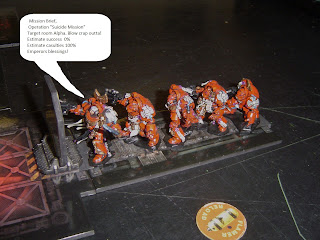 Sgt Bob Lorenzo inspires his men at the briefing.

The termies advance confidently, covering all approaches they prepare to meet the foe. It soon becomes clear that the foe is something a bit different. 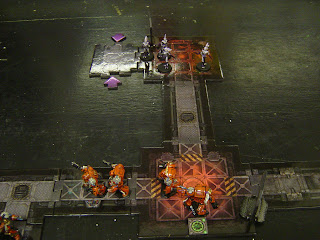 Up ahead, the forces of chaos gather at vital junctions. Just as the marines prepare to assault these positions, the rearguard falls to the "Hypnotic Glamour" of Slanesh daemonettes! With demons attacking from behind the squad must throw everything into an attack. 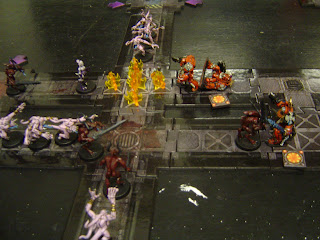 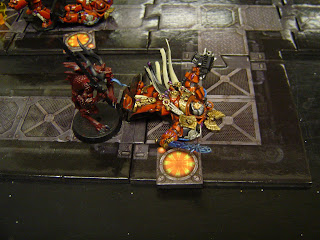 The chaos forces have  built up to levels that cannot be stopped by a few marines. Screaming blasphemies, they hurl themselves at the termies. In seconds the flamer marine is the only man still standing, with his last few drops of napthalene, he secures a narrow corridor and turns to make a "Last stand". 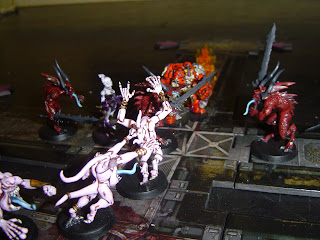 I want my mammy!

With only a powerfist to rely on, the last marine is torn to pieces by the horde of monsters.
Although a loss for the marines, this mission had worked just as I wanted. The demons had proved very difficult for the termies to deal with. The "Hypnotic Glamour" of the demonettes had worked well, acounting for two marines. The bloodletters had finished the rest. The pink horrors had not really been needed and were unable to test their "Blue horrors" special ability.
Time to try a different mission with a few more marines!
Posted by Reg at 04:01 2 comments: