The Men Who Would Be Kings TMWWBKs 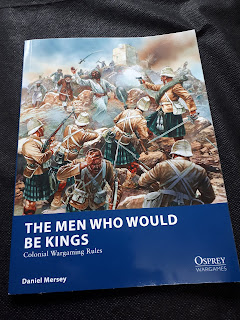 For miniatures games I prefer rules that are simple,fast and give me a good game experience.
I have been a fan of the "Rampant" series by Daniel Mersey since I first played Lion Rampant, now I own "Lion(Medieval),Dragon (Fantasy), Rebels & Patriots(AWI, FIW etc)"and now" TMWWBKs (Colonial).I also own his "Dux Bellorum" rules.(Totally different rules system but still excellent).

Rebels & Patriots is the most played of these, due to massive AWI collection, so I was keen to get a look at this (new to me) book.
The "Rampant" series uses a single mechanic tweaked to reflect the period represented. For example, two "hits" are required to "kill" a figure shooting in R&P but only one in TMWWBKs making firing a lot more deadly and changing game-play massively.
When you consider that most Colonial "Tribal" armies have little to no ranged abilities it presents a whole new set of tactical problems for the player to overcome.

The game uses D6s (sometimes a handful of them). Basing is very flexible. Units are 8-12 Cavalry and 12-16 Infantry.

A large number of army lists and scenarios are available and the book includes a basic "solo" variant.